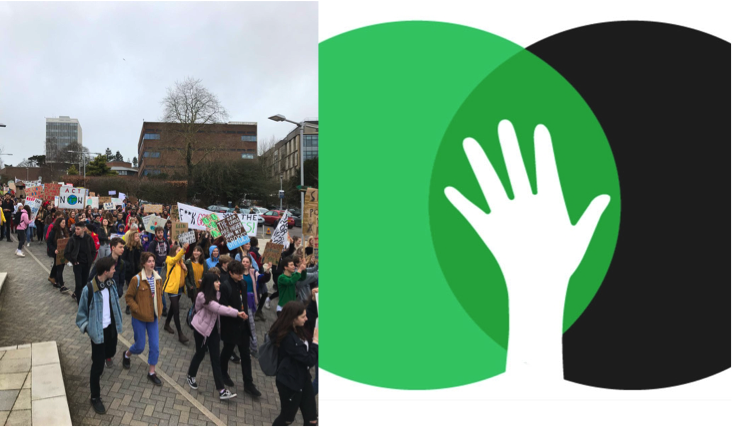 Campaign on climate emergency with us

We are currently looking to co-opt a workplace environmental representative on the Committee. UCU provides a wealth of resources to campaign on Environmental issues and there is training coming up on 5th of February 2020 in Exeter.

Several environment resolutions were carried at UCU’s annual congress held at the end of May 2019.

Our school students are fighting for a better future for all of us. Let’s make sure they are not fighting alone.

30 minute solidarity stoppage
UCU has launched a campaign to show solidarity with the global student strike called for 20 September 2019. We are building support for a TUC motion calling for a 30 minute workday solidarity stoppage on that day.  It would greatly help our branch to show support in this campaign, by opening discussions around these issues among members, with other campus unions and trades councils and with the student unions.

To protest against the lack of government action to combat the climate crisis, Youth Strikes 4 Climate and UK Student Climate Network have written to trade unions asking for support:

Who can be an environmental rep?
Any UCU member who is enthusiastic enough to promote a green agenda in the workplace.

What can a union environmental rep do?
Environmental reps can work in a similar way to other union reps by raising awareness of green issues in the workplace and making sure they are included in the negotiating/bargaining agenda. A main concern would be to agree a joint approach to ‘greening the workplace’, ideally formalised in a collective agreement and overseen by an employer/union committee that addresses environmental issues.

I’m interested in being an environmental rep, what do I do now?
Contact the branch, the Secretary or the President.

Where can I get more information?